The catalyst for the 1960’s psychedelic revolution began in the small town of Weyburn, Saskatchewan. 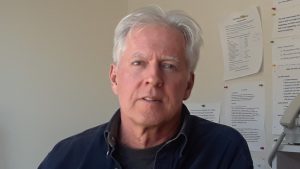 Based on a true story, Vancouver writer Victor Nicolle’s screenplay It’s All Too Beautiful brings to life the drama of Dr. Humphrey Osmond, a brilliant young psychiatrist, who arrived with his family at a remote mental hospital in Saskatchewan determined to revolutionize the treatment of schizophrenia.

Osmond’s success using mescaline and L.S.D. broke the stranglehold that psychoanalysis had on the previous generation of practitioners.  At the same time, Osmond became a prime motivator for the 1960’s psychedelic movement, ‘turning on’ world-famous author Aldous Huxley and an entire generation of young people who questioned everything and everyone that had come before them.  Though Osmond’s influence on those times was pivotal, he and his family paid a high price for being at the cutting edge of social change.

Nicolle researched It’s All Too Beautiful over a ten-year period, including a first-hand account from his mother who worked at the Weyburn Mental Hospital. “My mom was a great source of first-hand material from her time working there as a nurse,” Nicolle said.

“When I was growing up in Vancouver, I used to follow Daryl Duke and his achievements in the entertainment industry.  To me, he was one of the few guys who could make it both here and on the outside.  So, when I learned that I had won the Daryl Duke Prize I was blown away.  Not just because a group of people had acknowledged my script and saw something in it.  But that it was coming from a place in my past that was both significant and heartfelt.”

The Prize recognizes excellence in a screenplay for an unproduced long-form dramatic film telling a fictional story. The Prize is intended to allow the winner time and support with which to complete a new draft of the intended work, a copy of which is to be submitted subsequently to the jury.

Two of the three previous winners of the Daryl Duke Prize, Kate Bond and Amir Kahnamouee, have participated in the Whistler Film Festival Screenwriters Lab which led to both of their scripts being optioned by respected producers.

“Daryl dedicated his life to storytelling and building a Canada with its own integrity, sovereignty and culture. We created this Prize to cherish his memory and to further his mission,” said Anne-Marie Dekker, who is a director of the Foundation and Daryl’s widow.

The jury selected It’s All Too Beautiful through a blind process from among 67 entries submitted by the September 30, 2019, deadline.

Information about the 2021 Daryl Duke Prize will soon be posted at www.daryldukeprize.ca.