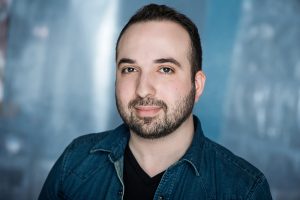 Set in Montreal where Amir was born, Port of Call is inspired by the real life experiences of his uncle who immigrated to Canada with his family to seek a better life around the time of the revolution in Iran.

“My uncle had a PhD in architecture from Italy but didn’t have the time or means to get licensed in Canada since he was balancing multiple jobs to support his family.  I remember him reading an issue of Architectural Digest with a glint in his eyes.  His obvious love and longing for the craft was my inspiration for Port of Call,” Kahnamouee said.

Port of Call tells a universal immigrant story of struggle and perseverance.  The main character, Ali, is forced to embark on a new life in Canada on his own after the sudden death of his father.  Upon landing in Montreal, Ali finds himself broke, adrift and buoyed only by the memories and wisdom of his late father.  What ensues is a journey through Montreal’s rugged urban landscape, where Ali is forced to take a job as a nighttime parking lot attendant in order to make money to pay for his architecture accreditation training. The more he tries to resist? his new situation, the more he gets pulled off course by a tide of tragicomic events. Port of Call demonstrates that sometimes it takes more than just sheer will to overcome life’s unforeseen circumstances.

“I’m incredibly honoured and grateful to accept the Daryl Duke Prize. There aren’t many opportunities out there for emerging writers so I can appreciate what the Daryl Duke Foundation is doing to foster new voices in Canada,” Kahnamouee said.

The 2018 Prize is the third to be awarded by the Daryl Duke Foundation.  Trapline, the screenplay by 2017 Prize winner Kate Bond, has been optioned and is now in production.  Kate is about to take leave from her work as a lawyer to work on new writing projects.

“Daryl dedicated his life to storytelling and building a Canada with its own integrity, sovereignty and culture that reflects the true make up of our country.  We created this Prize to cherish his memory and to further his mission. I know he would be thrilled with the success we have had to date nurturing great new Canadian story telling talent,” said Anne-Marie Dekker, who is a director of the Foundation and Daryl’s widow.

The Prize, in the amount of $25,000, recognizes excellence in a screenplay for an unproduced long-form dramatic film telling a fictional story. The Prize is intended to allow the winner the time and support with which to complete a new draft of the intended work, a copy of which is to be submitted subsequently to the jury.

The Daryl Duke Prize Jury is chaired by R. H. Thomson, one of Canada’s leading actors, who has performed extensively on stage, television and film for more than three decades. Colin Browne, professor emeritus in the School for Contemporary Arts at Simon Fraser University, and Patricia Gruben, associate professor of film in the School for the Contemporary Arts at Simon Fraser University, are members of the Jury.

The Jury selected Port of Call through a blind process from among ninety-eight entries submitted by the September 30, 2017 deadline.

Information about the 2019 Daryl Duke Prize will soon be posted at www.daryldukeprize.ca.